Build Your Own Table 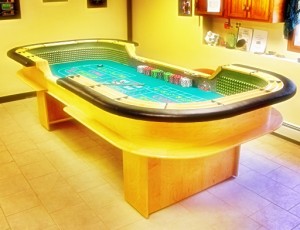 When the dice setting bug bites you one of the first things players want to do is build some sort of practice rig.  I’ve used everything from a cardboard box to an empty dresser drawer as a “practice rig,” but eventually I built a couple.  My first efforts were two feet wide by three feet deep.  The sides were six inches tall at the front of the rug, running up to ten inches at the back.  The back wall was ten inches tall as well.  I bought real casino diamond pyramid rubber for the back wall and billiard cloth for the deck.  And for the next five years or so that was my primary rig.  I even packed it with me when I did seminars on the road.

Eventually I wanted to move on to a larger table, but I just didn’t have room in my house for a full-sized one and didn’t want to give up my garage for one.  So, I opted for a “tub” table that’s eight feet long.  I would have preferred a ten footer, but the square footage for it just wasn’t there.

Of course, one of the things I considered doing was building my own table.  My pal “Grits” built a beautiful ten footer out of maple wood that was a real work of art.  Of course, he had the tools and the skills to pull this off.  I recall my pal Roadrunner comparing his practice rig to mine one time.  He said, “I craft fine furniture.  You build shit.”  That pretty much sums it up.

If you have the tools and skills and think you might want to attempt to build your own table we do have a set of plans put together by one of our Axis Power Craps forum members many years ago.  You’ll find a zipped file with those plans on the link below.  Don’t want to build an entire table?  Just build one end and you’ll have a heck of a practice rig.  It could be a beautiful thing. Here’s that link:

Learn How to Build Your Own Table

This is the breakthrough video that sent the competition back to the drawing board. This was first professionally produced DVD demonstrating the mechanics of a controlled dice shot. Here are a few of our customer comments on the DVD:

"The other guys promised me gold - Heavy delivered."

"Heavy has thrown another winner!"

"Fixed my toss and made me a winner."
This DVD includes the portion of the seminar that deals specifically with the mechanics of the grip and toss, along with roughly twenty minutes of tossing and coaching live at the craps table. You'll see Heavy and his students setting and throwing the dice with the camera running real time to show the results.

Altogether you'll receive almost three hours of player education featuring the best dice sets, grips, tosses, and more. In addition, we cover betting strategies, money management, discipline, focus, the mental edge, and playing the comp game to win. You'll also receive the e-versions of the seminar workbook, manuals from our other seminars, handouts and strategy cards as an added bonus. Order now and we'll also include a copy of Heavy's"Crapshooter's Buffet" audio CD - recorded live at the Las Vegas Craps Festival in 2001.

The Axis Power Craps Clinic on DVD - it's the next best thing to being there!

Buy Heavy's Axis Power Craps Manual! Axis Power Craps details five skill sets almost anyone can learn. Master these and you too can become a precision craps shooter. Order now and find out how!

Axis Power Craps includes betting strategies for every dice pre-set arrangement. Precision dice shooting works for both right-way and wrong-way play. Your package features an instructional 100 page workbook with dozens of photographs of dice pre-sets and grips. Each book comes with two shirt-pocket precision dice shooting strategy cards, as well as practice forms you can duplicate and use to record your rolls. Axis Power Craps is just $19.95 in e-book format. You will receive the book via e-mail within 24 hours of making payment. The dice setting strategy cards will be sent via 1st class mail, so be sure to include your mailing address. Order on-line through PayPal at this link: If you prefer to pay by check or money order, send your remittance to:
Steve "Heavy" Haltom P.O. Box 7094 Tyler, Texas 75711
Be sure to include your shipping address and e-mail address for order confirmation.

Heavy is Available for Private Lessons


Looking for private craps lessons to sharpen your skills? Heavy is available for private lessons in his Craps Pit in East Texas, live in Las Vegas, Biloxi or Tunica, or right at home in the comfort of YOUR craps pit. A private lesson makes a great birthday or anniversary present and his highly recommended if you’re ramping up for an upcoming trip to Vegas.

Here’s how private lessons in East Texas shake out:

3 hour Friends, Spouses and Significant Others Private Lesson for Two on Basic to Intermediate Craps and Dice Control - $899

6 hour Friends, Spouses and Significant Others Private Lesson for Two on Basic to Intermediate Craps and Dice Control – includes lunch - $999

Looking for private lessons in Vegas, Biloxi, or Tunica? All classes conducted in a casino dealer school on authentic casino craps tables. You and up to six of your friends can take over the school for the day for the full Axis Power Craps private seminar – including Heavy’s TrendMaster Betting Class as a special bonus! That’s 8 hours of group time with Heavy. Price includes dealer school rental and a pizza lunch delivered to the school. $795 per person with a four player minimum. Add a live casino session with Heavy for just $100 per person more with a four player minimum. A 60 day advanced reservation is required to insure availability of the dealer school.

If you have a private table in your home and would prefer to take a class on it - private lessons are available for you as well. Final cost will depend on your location and travel expenses incurred relative to the class. A private Axis Power Craps class, including Heavy’s TrendMaster Betting Strategy training for you and up to five of your friends will likely run around $795 per person with a four person minimum. Final price will be determined at time of registration.

Please note: Classes are available on weekends only and must be booked a minimum of 30 days in advance. 60 day advance registration required for Las Vegas, Tunica, and Biloxi. Need more details? E-mail Heavy direct at axispowercraps@gmail.com with the Subject line: Private Lessons for an immediate response.

Looking to sharpen your practice skills with regulation casino dice? Look no further. Axis Power Craps is proud to offer these beautiful 3/4 inch flush-spot, razor edge, high polished dice. Created from an exclusive cellulose acetate formula developed to insure clarity, hardness and stability, these dice are milled to 1/10,000th of an inch and certified perfectly balanced. They are the perfect dice to take your practice sessions to the next level. Each five-die stick is serialized and stamped with the Axis Power Craps logo. Designed with precision dice shooter practice in mind, these dice are only sold in two-stick sets containing one stick of red dice and one stick of green dice. Both sticks have matching serial numbers. Axis Power Craps Dice are currently SOLD OUT until our 2020 shipment arrives. Delays are expected due to manufacturer backorders. Thank you for your patience.